笔者评：这段电影剪辑是基于3D点云技术而制作的，点云获取方式是通过多目成像原理，利用不同视角的视频流而三维重建真实空间，继而应用到影视场景中，从重建效果来看，非常值得做技术的和搞影视的同行一看。3D点云相关技术在影视中的作用，将来会更为凸显，想想现在拍摄电影时，需要布置的道具这场景，成本高，且利用效率低下，如果采用3D点云获取技术，对场景进行获取后，可多次使用，且符合将来真3D电影的大趋势。 New Zealand animated short-film Sifted is the first live action film to be produced in what is known as a 'Point Cloud world', which is where 3D points gathered from many photos of the same object are used to calculate their 3D form. The film follows a female character (Mia Straka) as she walks through a 3D animated land that has been constructed from thousands of photographs of places throughout New Zealand and the world. The 3D models seen in the film are produced by a technique called photogrammetry, where 3D models are produced from photographs, in a similar way to how maps have been made for centuries. Dan Monaghan says the style of the film was inspired by how you could take an old Super-8 shot and combine the images in to a big wide mosaic panorama. 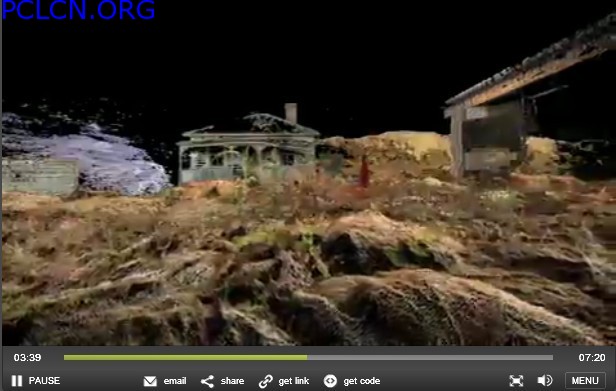 Taken one step further you could extract the 3D form of the landscape which would produce the point clouds. "The original idea was to have the girl walking through these individual photos that stacked together as cards," says Monaghan. However he says that further into the process he began to realise how beautiful the images looked as 3D shapes. ''When you take a camera and move it past an object you can actually extract a 3D shape from it and that's what the point clouds are doing in the film." Monaghan says that he was interested in creating a point cloud world because of its ethereal style, seeing through the objects instead of meshing them into solids made them more holographic. As his technique of gathering models developed, he realised the older more textured buildings looked much better, which is why there a number of historical buildings seen throughout the film. "A flat shining surface doesn't really work because it doesn't have any unique individual points on it, plus you could just use existing tools to make those shapes anyway," says Monaghan. "But an old building would look amazing when you put it into these algorithms and extract the 3D shape out of them. ''The way the world looks in this style is unique to me, it allowed me to combine a number of real world elements together in one scene juxtaposing rural New Zealand against the city of Auckland side by side. Other scenes are entirely made from places I'd never been, using thousands of photos from Google image search, such as the Colosseum and Stonehenge." The films actress Mia Straka was filmed from a crane with a motorised head, against a blue screen, with her walking on a treadmill. The shots were chroma-keyed and Mia and the camera move from set were translated into the point cloud world using custom software written by visual effects software developer Ben Torkington. Torkington spent around 18 months developing a program specifically for the visualisation of the film, the program works in Apple OS X and was rendered almost entirely on Monaghan's laptop. "Dan didn't seem to want to use any of the apps out there as they were more suited to the scientific community and couldn't put the actress in the world," says Torkington. "So I was able to write something from scratch which initially was just for this film". "The job now is finding a way that we can retool this app that was made with one specific purpose so that it can be used more generally for other forms of visual effects." Accompanying the visual landscape is music from Nick Buckton (SideKickNick). The instrumental tracks help enforce the moody atmosphere that builds to its crescendo. Coincidentally all four people involved in the film went to the same school, Mahurangi College, in the 199's. "The film took three years to make, from research to final product and is made up to 10,000 still images at 24 frames per second," says Monaghan. "I'd love to see it screen at a big festival, it would look incredible on a 20 metre screen." Currently the film has been out on the internet for three weeks and has been watched over 4500 times. The film was produced with funding from the New Zealand Film Commission and Creative New Zealand.