笔者评：在即将来临的2013 Siggraph上普林斯顿的学者李浩提交一篇借助点云处理技术进行高真实感头发获取与仿真的文章。李浩本人做过很多非常有趣的动画模拟仿真相关的研究，做基于数据驱动的模拟仿真重建的朋友可以看看。反正是笔者膜拜的对象之一！！
When it comes to the realistic simulation of humans and humanoids, the realistic modeling of hair is one of the last remaining barriers. Thanks to the ever-increasing power of computer chips, and billions of dollars of R&D into human kinetics, gait analysis, and musculoskeletal biomechanics, we can now model the human body and face with superb realism. Hair, though, with its millions of interwoven and interrelated strands, is really difficult to get right. For the most part, male heroes are just given short hair, and females — despite a disproportionate amount of effort on behalf of the 3D artist — are usually stuck with a dull, lifeless hairdo. 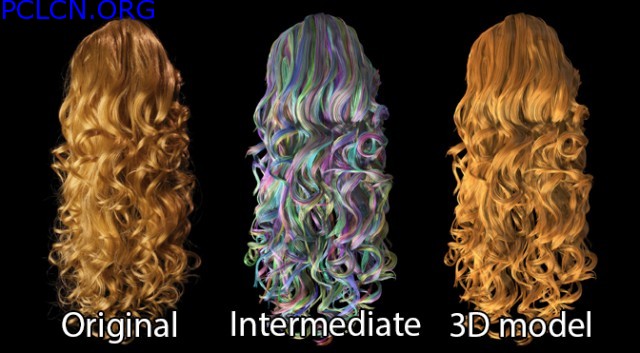 Now, thanks to the work of Princeton and the University of Southern California researchers that will be presented at Siggraph 2013 in June, beautiful, bouncy, realistic hair could be just around the corner. At this point you should watch the video below.
Rather than being painstakingly drawn, or perhaps imported from some kind of high-resolution motion-capture tool, “Structure-Aware Hair Capture” (SAHC) takes just a few still frames as input. From these still frames, which are taken at different points around the human hair model, a 3D point cloud is created. Orientation data (where is the strand of hair going?) is then combined with the 3D point cloud to create ribbons — local wisps of hair that aren’t connected to anything else. Finally, connection and direction analysis is performed on each ribbon to connect them all up into long wisps that are attached to the scalp.
So far we’ve only shown ringletted hair, but Structure-Aware Hair Capture also works with long sleek hair, short sleek hair, mid-length tousled hair, and what appears to be Einstein’s hair. In all cases, the software creates “hair models that are plausible for animation and simulation.” If you watch the video, it’s clear that the animations aren’t perfect, but presumably it would be fairly easy for a skilled 3D artist to go in and make some tweaks. For an automated process, Structure-Aware Hair Capture is really quite impressive.

Alongside SAHC, a bunch of other awesome technologies will be shown off at Siggraph 2013. For a brief overview, watch the preview trailer below — and stay tuned for further Siggraph coverage on ExtremeTech.
参考：
http://www.extremetech.com